The World’s Premier Mineral Exploration & Mining Convention is the leading event for people, companies and organizations connected to mineral exploration.

FEM and PDAC have had fruitful co-operation since 2002 when a Memorandum of Understanding was first signed by Mr. John Steel, President of the PDAC and Mr. Esko Lotvonen, County Governor of Lapland, Regional Council of Lapland.

The Memorandum of Understanding was renewed and signed at FEM 2009 by Mr. Jon Baird, President of the PDAC and Mr. Esko Lotvonen, County Governor of Lapland, Regional Council of Lapland.

The Embassy of Canada to Finland has been a long-time partner in this co-operation. The Embassy has organized a Canada Pavilion at the FEM Trade Show since 2005 together with the PDAC. Pavilion is targeted for Canadian companies interested or operating in the Fennoscandian Shield of Northern Europe. 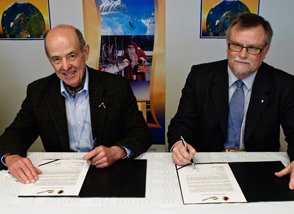